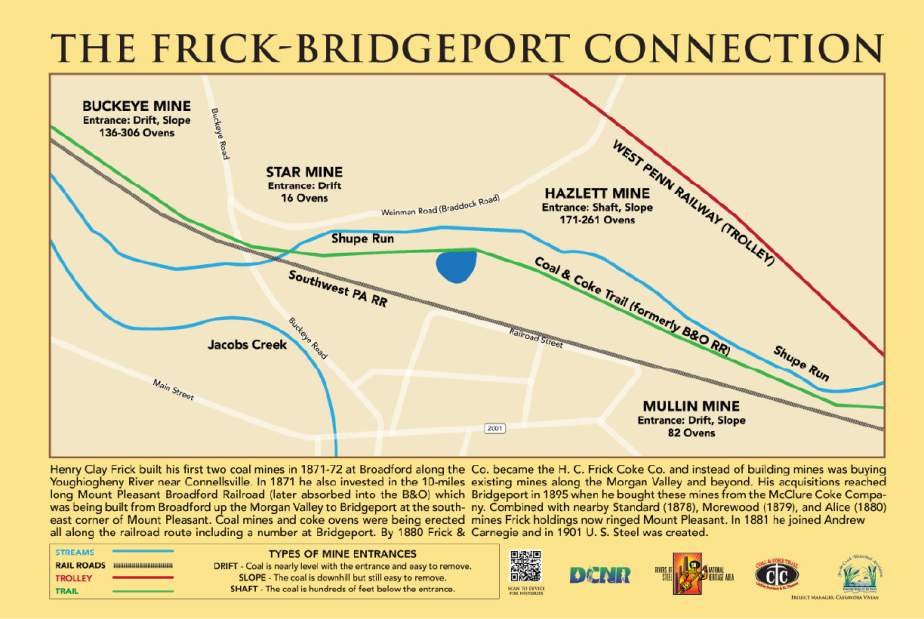 By the end of the 1860s the great coal and coke bonanza, similar in scope to the California Gold Rush, had begun in the United States. It was a speculative venture throughout Pennsylvania.  Anyone who had coal on their land or could purchase land with coal in it tried to get into the business of mining and coking coal, the fuel of the Industrial Revolution.

Henry Clay Frick was one of those speculators.  He built his first coal mine and coke ovens at Broad Ford: the Frick Mine followed by the Henry Clay. Then he bought a mine he renamed the Adelaide.  Over the next decade he bought more mines that he built, most of them along the Mount Pleasant  Broadford Railroad which was another of his investments.  That track began in Broad Ford and ended at Bridgeport.  The Bridgeport mines of Buckeye, Star, Hazlett, and Mullin were among those early mines.  They were not built by Frick, but by 1895 he owned them too. 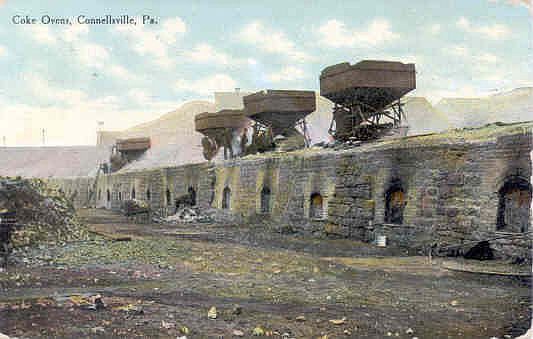 Type of Entrance: drift, to the left of Weinman Rd. Number of Ovens: 16 (Ovens buried but visible).

Current: Closed. Privately owned. One patch house still stands but abandoned because it is flooded.

Caption: The illustration is from John Aubrey Enman, The Relationship of Coal Mining and Coke Making to the Distribution of Population Agglomerations in the Connellsville (Pennsylvania) Beehive Coke Region, Unpublished Ph.D. dissertation, Pittsburgh, PA: University of Pittsburgh Library, 1963, p. 142.   Note no Star mine.

Current Private property. A few coke ovens (some given to Mount Pleasant borough), others deteriorating. Mine entrance on property: flooded and forming a small contaminated lake. No evidence that current oven ruins are the original ovens. Needs investigation.

Caption: Underground view of the Mullin Mine (misspelled Mullen). BOM Maps. Courtesy of the Pennsylvania Bureau of Mines, California, PA. 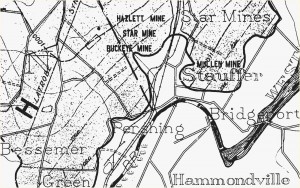 Names which appear occasionally but are not on any official list of local mines are the Bridgeport Mine and the Boyle Mine. Both are probably alternate names for those listed above. Others were absorbed into the mines above. The Stauffer Mine was a legitimate small operation at Bridgeport which had only 12 (one source says 20) beehive ovens and was worked by 12 men. It probably opened sometime in the early 1870s, was owned and operated by the J. F. Stauffer & Co. (which owned the Dexter and the Home mines) and never appeared on the Connellsville Courier Report of the Operation and Output of the Coke Ovens of the Connellsville Region list. It was located along Jacobs Creek at the junction with Shupe Run. Local former mine owners at Bridgeport have no recollection of this mine but most written sources seem to suggest that Stauffer Mine and Star Mine were one in the same.

As early as 1889 the Reports of the Inspector of Mines included Weinman Nos 1 & 2 Mines in the Bridgeport area. The Weinman family still owns land where the Star Mine once stood and were involved in mining in the area well into the 20th century. There is not enough evidence at the current time to identify the origin or the location of the Weinman mines.

The final surprise along the Mount Pleasant Broadford Railroad is the Duncan Mine. Located at the end of the line one mile north of Bridgeport (see railroad illustration below), it existed as early as 1871, had a slope entrance, and 25 ovens worked by 20 men. The ovens were beehives coke ovens measuring 11.5’ x 5.5’ and produced 8,125 bushels a week. In 1877 the Duncan Mine was flooded and out of commission. It would never reopen. 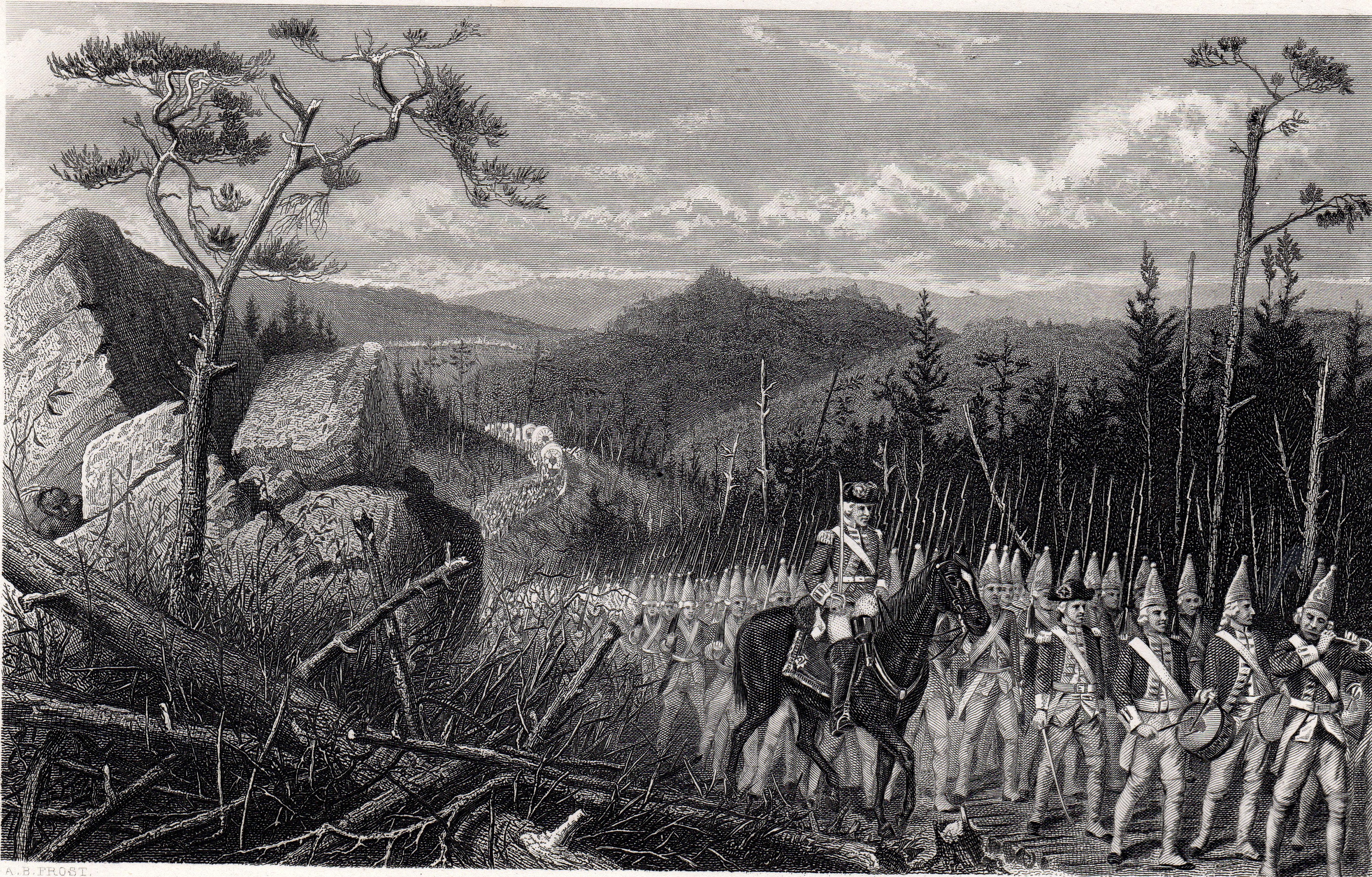 In 1755 British General Edwin Braddock marched his army north from Maryland to the forks of the Ohio River at what was then Fort DuQuesne. In our region he traveled north from Greenlick Lake, passed through a swamp and crossed Jacobs Creek to continue up what we now call Weinman Road. Near the end of Weinman Road the army cut northwest up through the fields toward Route 819 and on into and through what would become Mount Pleasant. Although not the only theory as to the actual road from Connellsville to Mount Pleasant, many local historians believe Braddock and his army came up what we now call Morgan Valley just as the Mount Pleasant Broadford Railroad would do over a century later. For a tour of Braddock Road from Greenlick Lake through Mount Pleasant and on to the Industrial Park go to: http://mphistory.com/default.aspx?pageid=12 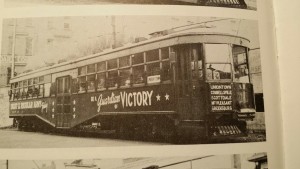 Coal mines were built in remote regions. There were no roads and no railroads. In many instances the forerunners of the road we use today were constructed by mine owners trying to get their product to market. This need also created the railroads in the area as well as the trolley system. The Mount Pleasant, Scottdale & Connellsville Electric Railway Company was chartered Feb 10, 1899 to serve the coal patches of the region. It became the main line of the West Penn Railway running from Greensburg to Uniontown and covering the 37.2 miles in 2 hours and 5 minutes. Passengers would board a single car which was nearly 60 feet long. Trolley service was discontinued in 1952 when many of the mines had closed and the automobile became more prevalent. The rails were abandoned and eventually removed in our area.

The B&O was first chartered in Baltimore in 1825. It did not come into this region until the 1870s when the coal and coke boom was beginning. In the Connellsville Coke Region it began in 1870 by purchasing the Mount Pleasant & Broadford Railroad. That short track had been leased to the Pittsburgh & Connellsville Railroad in 1872. In turn 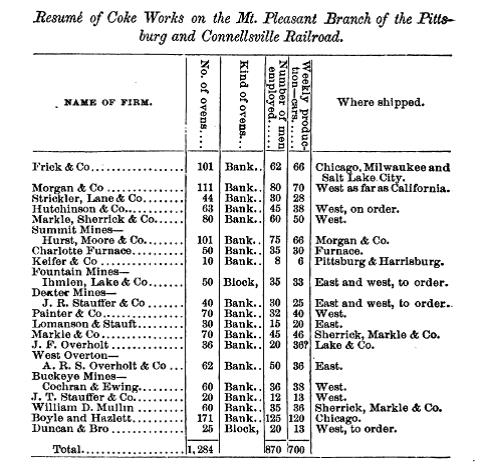 the two were leased and absorbed into the B&O as it made its way to the Ohio River.  Most of its tracks around southwest Pennsylvania are now owned and operated by CSX.

Caption: Route of the Mount Pleasant and Broadford Railroad up the Morgan Valley to Bridgeport and beyond in 1875. It also provides the name of the owner, the number and type of coke ovens, number of workers, weekly production, and where the coke was shipped.

–Franklin Platt. Second Geological Survey of Pennsylvania 1875 Special Report of the Coke Manufacture of the Youghiogheny River Valley in Fayette and Westmoreland County, Harrisburg: Board of Commissioners, 1876, p. 56. 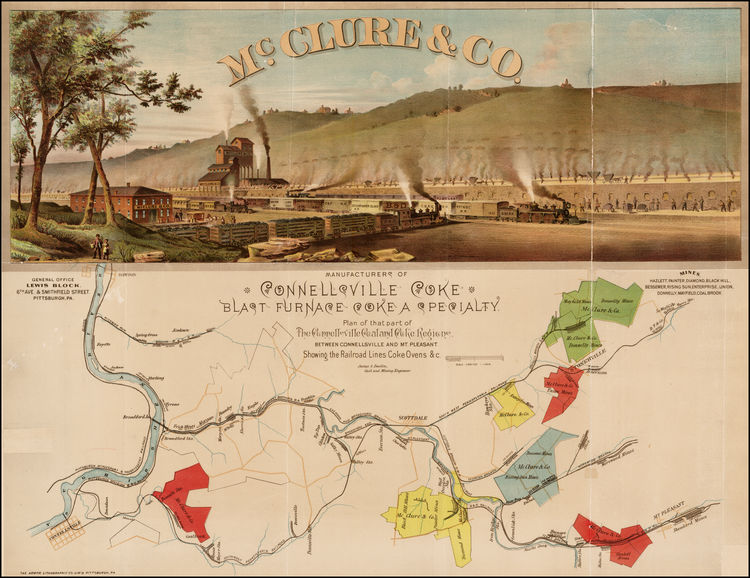 The Youghiogheny River runs north to south along the left edge of the map.  The Southwestern Railroad turns east from Connellsville in the lower left of the map and runs northeast to Scottdale where it continues northeast to the McClure mines at Donnelly and Mayfield.  One branch bears south to form the West Overton Branch to the mines of Bessemer and Rising Sun, and another branch, the June Bug branch, moves northeast to the Morewood Mine organized by H. C. Frick & Co.

The second railroad, the Mount Pleasant and Broadford, begins at Broadford on the Youghiogheny and moves northeast up the Morgan Valley. It passes the Frick (b1871), Morgan (p1877), Foundry (p1879), White (p1877 and renamed Globe), Eagle (p1880), Tiptop (p1879), and Valley (p1877-8, 1882) mines (all built or purchased by the H. C. Frick Company). It then turns southeast to Scottdale near the Black Hills Mine and along Jacobs Creek into the area of Bridgeport where the Buckeye, Star, Hazlett, and Mullin mines are located. As noted above the mines were purchased and owned by McClure and sold by McClure to Frick in 1895.

The various colors on the map indicate the shape of the mines below ground. 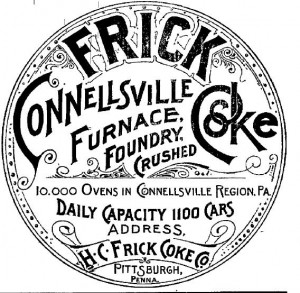 A FAVOR: We are looking for old photographs of the coal mines of the Connellsville Coke Region, especially around Mount Pleasant. Contact us at 724 542 4949 or cassandra.vivian@gmail.com.